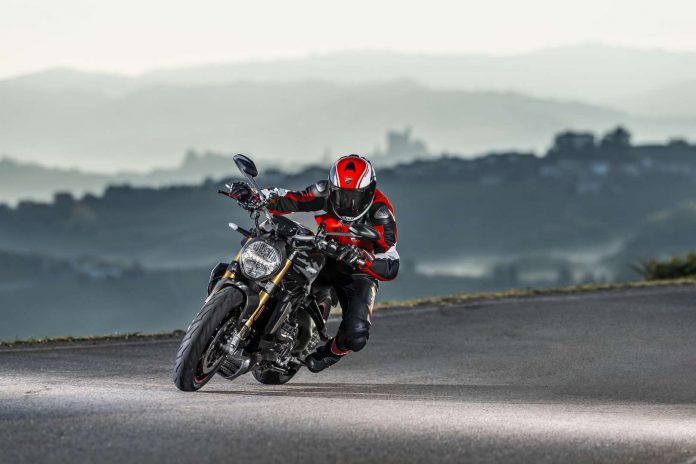 The Ducati Monster is pretty legendary in the motorcycle world. It pretty much created the naked sport category when it was introduced in 1993 and motorcycling has never been the same since.

First, let me explain what a naked bike is. Modern sport bikes have body panels known as fairings. These help to smooth the flow of wind around the rider and increase speed. A naked bike lacks these fairings, leaving all its mechanical guts open to public view and generally features a more upright riding position. The Monster is one of these.

The Monster’s massive, 1200-cc, liquid-cooled, L-twin engine produces a prodigious 147 horsepower and 91 pounds-feet of torque. Couple that with the fact that through my tester’s carbon-fiber-bodied Termignoni racing exhaust, that engine sounds more like the foley track to a disaster movie or a seismic event than a regular motorcycle.

Far from being a big, dumb brute of a bike, the Monster 1200S is packed with all of Ducati’s incredible modern rider aids and performance tech. The 1200S gets an inertial measurement unit that makes its traction control, wheelie control and anti-lock brakes lean angle-sensitive. While I didn’t find the Monster to be intimidating in the way that the Aprilia Tuono was, this Ducati Safety Pack felt like an added security blanket protecting me from my own ham-fistedness.

The bike pairs its massive engine and brilliant electronics with a six-speed sequential manual gearbox with a quickshifter that works on both upshifts and downshifts, allowing you to change gears without using the clutch (once you’re rolling, that is). Like many Ducati gearboxes, the Monster’s requires a healthy kick to ensure it actually engages each gear, but it works well, and all I found myself wishing for was a dry clutch to go along with the basso profundo grumbling of the bike at idle.

The suspension on the 1200S comes from Öhlins and is as wonderful as I’ve come to expect from the brand. The bike feels firm but never jarring. The suspension transmits road information clearly but does so without beating the rider up. The units on the Monster 1200S are fully adjustable, making it much easier to dial in the right ride for every rider.

The brakes are — surprise, surprise — Brembos, and holy hell are they good. The front units are M50s which see duty on basically every high-end Euro bike, and they are right at the top of the pile when it comes to stopping power, feel and ease of modulation. The front rotors are sized at 330 millimeters while the rear brake disc is 245 mm in diameter, gripped by a single Brembo caliper.

The Monster puts you in a unique riding position. Your torso stays relatively upright with your legs folded up aggressively underneath. It takes a few minutes to get used to but quickly becomes natural, and the added clearance that the leg position gives is welcome because the bike is pleased as punch to lean way the hell over whenever you ask it. The Monster is quick to turn but feels stable, rather than tippy. Its wide handlebars offer the right amount of leverage to make threading the bike through corners a cinch without being so broad that lane splitting becomes a chore.

The throttle on the 1200S is excellent. The Monster has none of the jerkiness brought on by the emissions-focused tuning that is so prevalent on modern bikes. The bike’s power delivery is strong and linear, thanks to all that sweet, sweet displacement. The Monster is a bike that is easy just to hop on and go. You don’t have to psych yourself up, convince yourself to be brave like you do on a lot of big-displacement naked bikes. It’s fast, friendly fun.

The elephant in the room with Ducatis, historically speaking, has been maintenance and its frequency and cost. But this is mostly a concern of the past. Sure, taking your Duc to the dealer isn’t going to be as cheap as getting your Suzuki serviced, but considering that the Monster 1200S’ valve service interval is a staggering 18,000 miles, you’re not going to be shelling out too terribly often.

The Monster 1200S is one hell of a machine, and frankly, at its nearly $18,000 asking price, it had damn well better be. Is it worth that kind of scratch? I think so, especially if you want a motorcycle to use every day. It’s comfy enough, quick enough and easy enough to ride that I found myself using it almost entirely in place of a car.

Like most of the Ducati models I’ve ridden, I’ve found myself missing them when they’re gone in a way that I don’t with other vehicles. It’s cheap and easy to say that it’s because they’re full of passion and sex appeal and blah blah blah, but there is something about the way that the Monster rides that worms its way into the core of your being and reminds you why you love motorcycles. Is it worth the price of admission? Yeah. Definitely.

Windows Replacement – What You Need To Know

Bedtime routines: five ways to get a good night’s sleep

March 2, 2020
We use cookies to ensure that we give you the best experience on our website. If you continue to use this site we will assume that you are happy with it.OkPrivacy policy