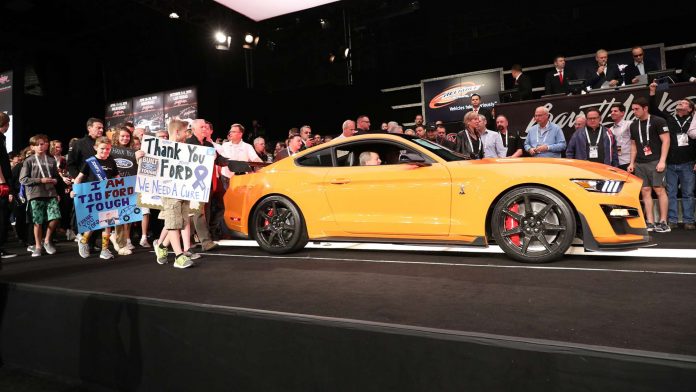 If you were hoping to snag up the first 2020 Mustang Shelby GT500, you’re too late. As Ford is wont to do, they auctioned off the first car for charity last night at Barrett-Jackson in Scottsdale.

Craig Jackson, chairman and CEO of Barrett-Jackson also happened to be the winning bidder. His winning $1.1 million bid is the largest bid ever on Mustang, according to the auction, and the proceeds go to the Juvenile Diabetes Research Foundation, or JDRF.

“The chance to become the owner of the first 2020 Ford Shelby GT500 cars is an opportunity of a lifetime,” said Joe Hinrichs, Ford president, global operations. “More importantly, being involved in helping to raise much needed funds and awareness for JDRF is a big win for everyone.”

Edsel B. Ford II and Aaron Shelby accompanied the performance car onto the stage. The car was Lot No. 3008, VIN 001, and was selling at “No Reserve.” Of course, it was expected to bring big money, so setting a reserve price would’ve been silly. Although the car that pulled onto the block was a yellow GT500 with the track package, the winning bidder gets to choose the color and options of their car when it’s produced.

According to Ford, the company contributes $3.5 million annually to the JDRF, with a grand total of $70 million during the life of the relationship. That’s serious money for a properly good cause.

For those who might be living under a rock, the 2020 Shelby GT500 marks a return of the badge to the latest Mustang, powered by a 5.2-liter cross-plane crank, supercharged V-8 making “over 700 horsepower.” The new car ditches the manual transmission and is replaced with a 7-speed dual clutch that shares an origin with the Ford GT supercar. Buyers can choose from different handling packs, and even carbon fiber wheels.

Since none of you were the winning bidder — unless Craig is reading this in which case we want a ride — you can get your own GT500 when it goes on sale later this year.

February 4, 2020
We use cookies to ensure that we give you the best experience on our website. If you continue to use this site we will assume that you are happy with it.OkPrivacy policy