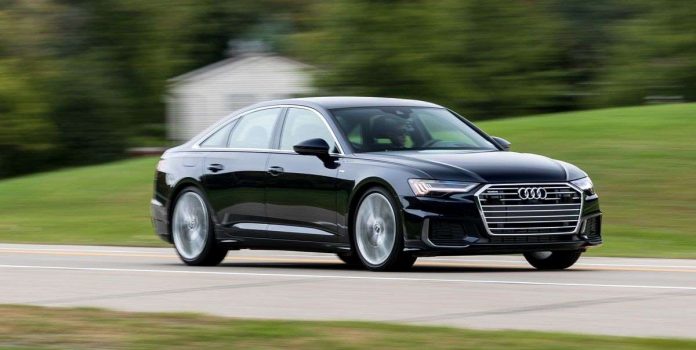 Any way you slice it, the outgoing Audi A6 is a luxury sedan par excellence. Not only was it great when it first debuted as a 2012 model, it also aged gracefully, remaining competitive throughout its life cycle. That fourth-generation A6 made it onto our 10Best Cars list multiple times and was an Editors’ Choice pick every year it was offered. All of which heightens the pressure on its successor.

From Supercharged to Turbocharged

The new turbocharged 3.0-liter V-6 engine is the biggest change about the new A6, at least from the driver’s standpoint. Audi’s switch from the previous supercharged 3.0-liter V-6 that made 333 horsepower (340 in the 3.0T Competition model) to a 335-hp engine of the same displacement but with a single turbocharger nestled in between the V’s cylinder banks has yielded an additional 44 lb-ft of torque for a total of 369.

The higher peak torque is noticeable too, at least once the turbo gets a-spooling. With launch control engaged, the new car outran the last A6 3.0-liter model we tested by 0.4 second to 60 mph, returning a 4.8-second time. That’s despite being burdened with an additional 103 pounds, at 4345 pounds. Catch the turbo asleep, though, and it’s a different story: The new model’s 5-to-60-mph street-start time of 5.4 seconds is only 0.2 second ahead of the older car, and in the 30-to-50-mph and 50-to-70-mph passing tests the new turbo lags its supercharged predecessor by 0.4 and 0.6 second, respectively. And it often takes an exaggerated jab of the throttle to wake it up while cruising. The engine is certainly smooth and remarkably quiet, however, and there’s plenty of power on tap, which it delivers with little drama but undeniable force. The new car also boasts higher EPA estimates—25 mpg combined, 22 city, and 29 highway—but our 21-mpg average was no better than we achieved with the 2017 A6, and neither was its 32-mpg result in our 75-mph highway fuel-economy test.

In a bid for increased fuel efficiency, the A6 has adopted Audi’s Quattro with Ultra all-wheel-drive system, which disengages the rear axle under light loads to reduce mechanical drag but seamlessly reengages it when the drive-mode selector is in the Dynamic setting, when the driver’s inputs imply a certain amount of frisky driving, or when the car senses or predicts slippage at the wheels. All A6s also feature hybrid technology in the form of a 48-volt alternator/starter as well as the accompanying battery housed under the floor of the massive, 19-cubic-foot trunk. It runs ancillaries as well as the engine’s stop/start system, which Audi has managed to render all but unnoticeable.

That battery location helps put a greater share of the A6’s weight on the rear axle: 55.5/44.5 percent front to rear, versus our 2017 example’s 56.3/43.7 split. Combined with 255/35ZR-21 Pirelli P Zero summer rubber, the A6 3.0T pulled 0.96 g at the skidpad. Equipped with the optional sport suspension—which brings a 0.8-inch lower ride height—the A6 never lists in fast sweepers nor heaves in transitions, and surprise mid-corner undulations don’t trip it up. The steering is precise and linear, with effort that may be dialed up slightly by selecting the Dynamic setting or specifying Sport steering effort in the Individual mode. Yet, however capable the new A6 may be, we still wouldn’t characterize it as a sport sedan. Luxury seems to have been the priority. Compared to its predecessor, it seems both larger and less engaging.

Beyond its new engine, the most exciting thing about the new A6 may be the interior. It’s fashioned a bit like Iron Man’s mission control room, all asymmetrical and angular with expanses of mirror-like piano-black trim. There’s so much surface area given over to screens and capacitive-touch switchgear that the coverage could be measured in square feet, not square inches. Mid-grade Premium Plus and top-shelf Prestige trim levels come with Audi’s 12.3-inch digital gauge cluster as well the company’s new MMI Navigation Plus with MMI touch-response interface, which includes a 10.1-inch upper touchscreen for primary infotainment functions above another 8.6-inch touchscreen for the dual front climate controls. Base models don’t get virtual cockpit gauges and must make do with an 8.8-inch upper touchscreen, but they do get the same size lower screen. Our Prestige model also came standard with four-zone climate control, replete with still another touchscreen located on the back of the front center console to manage temperature and airflow adjustments for rear-seat passengers.

Both of the front center touchscreens feature haptic feedback and pinch/scroll functionality, though it takes a firmer-than-expected press to register a response, which comes with a quiet click as it executes the command. The new interface may take some getting used to—some staffers felt strongly that the previous A6’s click-wheel MMI system was Audi’s ergonomic high-water mark—but the graphical clarity and added functionality are irrefutable. For instance, the lower screen can serve as a writing pad by which inputs may be made by scrawling letters or whole words. The system also offers a traditional keyboard for inputs, as well as a very good voice-recognition system.

We were less wowed by the A6’s exterior styling, which is emblematic of Audi’s tendency to fastidiously change everything without effectively changing anything. The most obvious differences versus the old car involve the lower, wider grille and a touch of added muscularity around the fenders that is accentuated by an upper character line that disappears in the doors. New lighting elements include HD matrix headlamps, sequential turn signals, and cute animations when locking and unlocking the doors.

At $78,340 as-tested, our 3.0T Prestige model was the most expensive A6 we’ve ever reviewed, well above the $72,895 base price Audi had been charging for the outgoing, 450-hp V-8-powered S6, the successor to which is slated to appear later this year. The Prestige version starts at $68,095, while the mid-level Premium Plus model is $63,695, and the base Premium grade opens at $59,895. The Prestige brings such high-zoot features as dual-pane sound-insulating glass, soft-close doors, 30 selectable colors for each of two ambient lighting zones, and a head-up display. Besides the aforementioned sport suspension ($1050) and 21-inch Y-spoke wheels ($2050), our test car wore a coat of deep Firmament Blue paint ($595) and boasted the $600 Cold Weather Package (heated steering wheel and heated rear seats) as well as the $2750 Driver Assistance package (adaptive cruise control, traffic-sign recognition, lane-keep assist, and Audi’s intersection assistant). The priciest extra-cost item fitted to this car, which we probably wouldn’t have missed, was the $3200 Individual Contour Seating package, with its massaging “contour” front seats, upgraded leather, and dressy birch wood trim.

There’s excellence aplenty in the new A6, even if it fails to set our hearts ablaze like the last one. It could be that Audi has held back some of the sport from this A6 in order to make the difference greater between it and the S6. Once the S6 arrives later this year—an entry-level model with a turbocharged four-cylinder engine and a lower price point is coming too—we’ll see if that’s the case.

Levels of distress and illness among students in UK ‘alarmingly high’

Keeping your money safe: how risky are these popular financial products?

ICOs Rake In $160 Million In First Half Of January

Here Are Some of the Most Ridiculous Custom Cars Rolls-Royce Built...

February 4, 2020
We use cookies to ensure that we give you the best experience on our website. If you continue to use this site we will assume that you are happy with it.OkPrivacy policy