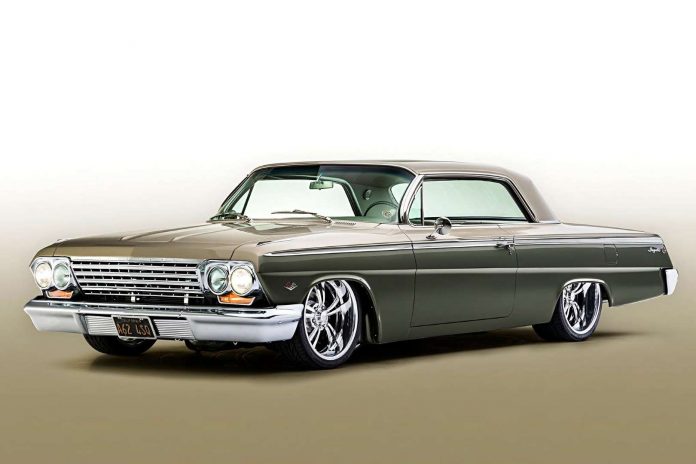 The Impala Bonowski was excited about was this 1962 Sport Coupe, built and owned by Jesse Lindberg. This car had also been at the 2018 GNRS, where it won trophies for Outstanding Paint and Mild Hardtop. When we met Jesse in Sacramento, we found out that he owns a small automotive repair shop in Redding, California. A few years ago he decided to put his automotive talent toward building a custom car.

He spent three years searching for a 1962 Impala before finding this one on Craigslist, 20 miles from his house. It was a Los Angelesborn, family owned car that had been disassembled as step one of a restoration project that stalled before reaching step two. The body was on a flat trailer with parts loaded inside the car. The frame was at another family member’s house. Other parts were pulled out of a field. Jesse paid $2,500, hauled the car home, got it stripped and protected in sealer, and began collecting parts. Four years later, he was collecting awards.

The stock lines of a 1962 Impala don’t need many, if any, cosmetic changes, and only a few trim changes were made to Jesse’s ride. The door handles, driver-side mirror, beltline trim, and badging are intact, but the rocker panel molding and the hood and decklid lettering are gone. The Sport Coupe’s popular convertible-style hardtop roof with simulated bow creases is unchopped, and the headlight lenses were tinted green to match the window glass. Custom rear quarter emblems are a variation on the Impala SS versions. These read “SQ,” signifying the car’s participation in Sound Quality automotive sound system competitions.

Jesse credits Eric Sanderson for help with bodywork, and “for mentoring me on how to build a car to the highest level.” Jesse painted the Impala with Spies Hecker Tan Pearltallic and Silver Green, separated at the beltline. The finish is perfected by plenty of outstanding chrome from Sherm’s Custom Plating.

Traditionalists might prefer 15-inch wheels and wide sidewall tires on their 1962 Impalas, but Jesse’s choice of 19×8 and 20×10 Raceline Static 5 wheels with low-profile 225/40R19and 295/35R20 Hankook Ventus V12 Evo tires balances the proportions of the body and adds a contemporary contrast to the exterior. The wheels also provide a great view of the 13- and 12-inch Wilwood disc brakes, plumbed to a Wilwood master cylinder and proportional valve.

Traditionalists will definitely approve of how Jesse maintained a (mostly) factory appearance in the interior. Ed Sanford from Sanford’s Custom Upholstery in Anderson, California, covered the original front and rear seats with tan leather and 1962 Bel Air cloth inserts from Ciadella Interiors. The upholstery pattern on the seats and door panels follows the factory design—modified with leather 1959 Chevy armrests. The factory steering wheel was finished to match the exterior paint and mounted on an ididit tilt/shifter column. AutoMeter water, oil, and fuel gauges replace the stock instruments. Instruments were color-matched by Redline Gauges. The Vintage Air evaporator and vents were installed below the dash. An American Autowire harness ensures that electrical components function just right. The plastic tissue box on the transmission tunnel hump is a new old stock dealer accessory discovered on eBay. In addition to the 57-year-old tissues that came with it, it holds controls for the stereo and RideTech air suspension. Transparent panels in the trunk reveal the AccuAir tank and compressor, batteries, and fuse block.

Jesse participates in Sound Quality audio events, so the high-end audio system is a significant part of his Impala. Before a single stereo component was added, he added many layers of sound deadening insulation to eliminate ambient noise and rattles. A Sony RXS-GS9 high-res receiver is mounted behind the dash, and the Arc Audio PS8 controller fits in the tissue box. The removable trunk floor panel covers five Arc SE amplifiers, which feature unique green lighting. Billet tweeter cups atop the dash hold Hybrid Audio Technologies Legatia SE-series 1-inch tweeters. Jesse fabricated housings into the Impala dash for a pair of Legatia SE 4-inch midrange speakers. Ten-inch Hybrid Audio Technologies Clarus subwoofers were installed in the kick panels and three 12-inchers were packed between the trunk and rear seats. Scott Welch and Larry Ng helped with installation and tuning.

The Chevy 350 Vortec small-block was built to perform well on the street and at car shows. Mark Birch in Redding handled the machine work and the engine was assembled with performance-designed internals, including Keith Black pistons, Eagle rods, and a GM Performance crankshaft. The vintage Chevy 409 dual snorkel air cleaner covers an Edelbrock Thunder Series 650 carb and intake manifold. Billet Specialties Streamline valve covers were painted to match the body. The rest of the engine is polished or plated for guaranteed eye appeal. A Billet Specialties Tru Trac serpentine drives a Powermaster alternator, Edelbrock water pump, and Sanden compressor. Twin SPAL fans pull air through a Mattson’s radiator. Exhaust moves through a pair of Doug’s Headers, 2-1/2-inch pipes, and Flowmaster mufflers with resonators. Micah Briggs of Drivetrain Specialties in Redding assembled the 700-R4 Transmission backing up the engine.

Underneath, Jesse cleaned and powdercoated the stock frame, and added aftermarket chassis parts to improve the profile and performance. He installed RideTech air springs and Fox monotube shocks at all corners. Stock front suspension pieces were replaced with Classic Performance Products tubular control arms and antiroll bar. Steering was upgraded with a CPP box. A CPP Panhard bar controls the stock rearend, which features 3.55:1 gears with an open differential.

The newly finished Impala made its first public appearance at last year’s GNRS. In Sacramento it picked up awards for Outstanding Paint, Outstanding Interior, and Mild Hardtop 1960-1969, and was selected as a STREET RODDER Top 100 winner. By the end of the year, Jesse’s Impala had been semifinalist for the Hot August Nights Cup, finalist for Goodguys Custom Rod of the Year, Meguiar’s display car at the SEMA Show, and runner-up for STREET RODDER‘s Street Rod of the Year.

How does Jesse plan to top his achievement? With a ProCharger-powered Pro Touring 1969 Camaro, that’s how. We’ll be looking for it at the 2019 SEMA Show.

How to Online Grocery Shop

Pete Davidson is dating an older woman – why is the...

All Your Friendship Questions, Answered

The Necessary Tweaks In Your Lifestyle To Prevent Dementia From Controlling...

January 24, 2019
We use cookies to ensure that we give you the best experience on our website. If you continue to use this site we will assume that you are happy with it.OkPrivacy policy