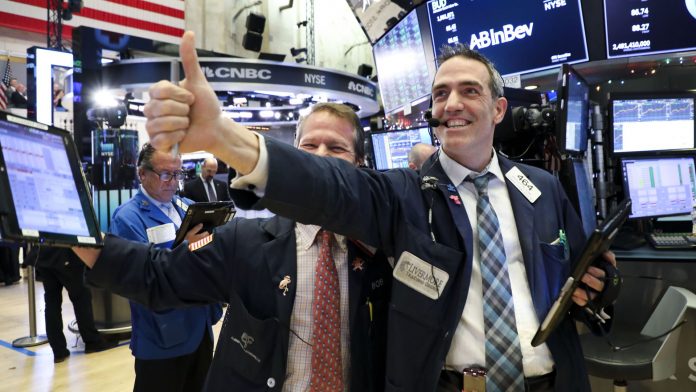 Stocks ended higher Friday as President Donald Trump announced that he had reached a continuing resolution with Congress to reopen the U.S. government. The temporary deal will fund the government for three weeks, until Feb. 15.

The Dow gained 183 points, posting its fifth consecutive week of gains. The S&P 500 rose 0.85 percent, while the Nasdaq added 1.3 percent as Starbucks gained on strong earnings.

The major indexes initially pared their gains after Trump made the official announcement, as some traders were disappointed that it wasn’t a more comprehensive agreement.

“We’ve become conditioned to the D.C. dysfunction. Traders will take profits and prepare themselves for additional stalemates,” Jeff Kilburg, the CEO of KKM Financial, told CNBC.

Apple, Amazon Alphabet and Facebook led the gains as investors got back into a risk-taking mood on hopes the shutdown was ending, buying their favorite technology names. Apple jumped nearly 3 percent.

The Wall Street Journal reported that the Federal Reserve is closer than expected to ending its balance sheet unwind, adding to the bullish tone on Friday.The Fed’s decision is a key consideration for investors as they gauge the extent to which the central bank will tighten its monetary policy.

Also helping sentiment: Treasury Secretary Steven Mnuchin projected confidence about the status trade negotiations between the U.S. and China in comments to Reuters. Mnuchin said both sides were “making a lot of progress” in the talks.

Intel reported fourth quarter earnings which beat Wall Street expectations but missed on revenue. The company’s 2019 forecast showed revenue growth of just 1 percent, with Intel expecting to report first quarter earnings of 87 cents a share – 14 cents below Wall Street expectations. Intel continues to search for a new CEO, seven months after Brian Krzanich was forced out. The stock was down more than 7 percent in trading, but other chip stocks were holding steady.

The government shutdown took on a new phase of seriousness Friday as the FAA halted some flights at New York’s LaGuardia airport on Friday because of a shortage of air traffic control workers. Traders are betting that increasing fallout from the shutdown may force Republicans and Democrats to at least come together for a short-term compromise.

The U.S. Senate, after rejecting two shutdown-ending bills, continues to search for a way to end a government closure entering its 35th day. The shutdwon and threatening the economy, as hundreds of thousands of federal workers missed a second paycheck on Friday. However, following the two rejected bills, a bipartisan group of lawmakers said they were introducing an amendment in the Senate to temporarily reopen the roughly one-quarter of the federal government. Senator Ben Cardin, one of the Democratic co-sponsors, said he did not think it contained any wall funding.

Trump said on Thursday that if Republican Senate Majority Leader Mitch McConnell and Senate Democratic leader Chuck Schumer reached an agreement to end the shutdown, he would support it.

Investors are also continuing to monitor concerns surrounding a trade deal with China. Markets came under pressure Thursday after Commerce Secretary Wilbur Ross said that trade negotiations with China were far from complete. “We would like to make a deal but it has to be a deal that will work for both parties,” Ross told CNBC. “We’re miles and miles from getting a resolution.”

Mnuchin’s comments about progress in the trade talks came a few hours after Ross spoke. The Treasury secretary said he is looking forward to speaking with Chinese Vice Premier Liu He next week, when the representative visits the U.S.

Things To Consider When Choosing A Broadband Package

How Could a University Marketing Graduate Get It So Wrong?!

Well done, Virgin Atlantic – now all companies must ditch their...

Looking Ahead To 2019: What Factors Should Real Estate Examine?

Where to Find Start-Up Nonprofit Money

I’m 40 and chronically single. Is my unhappy childhood to blame?

Scanguard Antivirus – Can You Trust It? [Review]

The Tories have form when it comes to economic catastrophe

Waiting for money to be wired from overseas caused me stress

March 8, 2019
We use cookies to ensure that we give you the best experience on our website. If you continue to use this site we will assume that you are happy with it.OkPrivacy policy