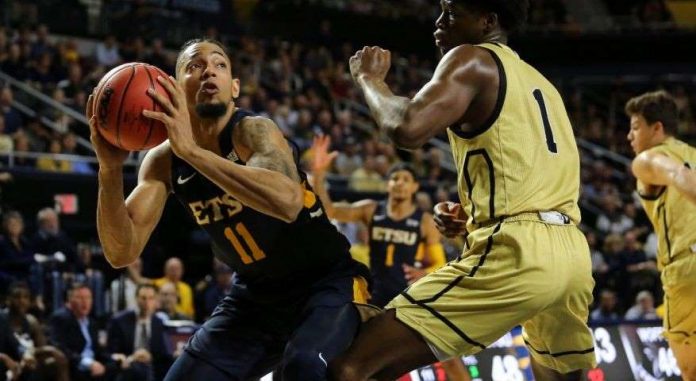 East Tennessee State lost to Wofford in overtime on Feb. 7.

There should be large contingent of Wofford fans in Minneapolis. And Buffalo fans in Tuscaloosa and Nevada fans in Philadelphia. ‘Tis the season to expand your fandom…and direct vitriol in the appropriate direction.

Minnesota, Alabama, Temple and other bubble teams need a one-bid SoCon. They need a one-bid MAC and a one-bid Mountain West. While one-bid mid-major leagues don’t guarantee at-large tourney berths for those three teams or others on the bubble, their chances lessen with each mid-major conference tournament upset.

Here are some mid-majors who could burst the bubbles of at-large hopefuls by winning unexpected conference tournament titles:

The SoCon regular-season race is all but over; Wofford clinches the outright title with a win at Furman on Saturday or an East Tennessee State win over UNC Greensboro on Sunday. The Terriers have a firm grip on an at-large bid if they don’t win the tourney title, too.

That tourney title could, however, be prevented by ETSU, who took Wofford to overtime two weeks ago.

Bowling Green put the MAC and bubble teams on notice with a win over heavy MAC favorite Buffalo on Feb. 1. And with five remaining regular-season games, the Falcons and Bulls are tied atop the East standings (11-2).

Despite some slips, Buffalo will earn an at-large bid if they slip again, this time in the conference tournament to, for example, Bowling Green. The MAC hasn’t been a two-bid league since 1999.

Mountain West-leading Nevada, an at-large lock, pummeled Utah State in early January, but the Aggies are still the conference’s second-best team and arguably best suited to upset the Wolf Pack  in Vegas.

They’re also a bubble team themselves, therefore subject to twice as much disdain from fellow bubble teams.

The other needs to stumble at least once or twice.

Both teams are projected as potential bubble teams if they lose in the conference tournament. If both the Bruins and Racers win out in the regular season and meet in a tight OVC Championship, it could be a two-bid league.

Generosity – The Gift That Heals The Giver

Let’s Beat the Heat This Summer Through Online Shopping

February 3, 2019
We use cookies to ensure that we give you the best experience on our website. If you continue to use this site we will assume that you are happy with it.OkPrivacy policy